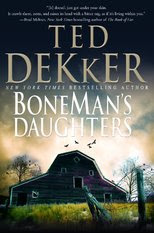 They call him BoneMan, a serial killer who's abducted six young women. He's the perfect father looking for the perfect daughter, and when his victims fail to meet his lofty expectations, he kills them by breaking their bones and leaving them to die.

Intelligence officer Ryan Evans, on the other hand, has lost all hope of ever being the perfect father. His daughter and wife have written him out of their lives.

Everything changes when BoneMan takes Ryan's estranged daughter, Bethany, as his seventh victim. Ryan goes after BoneMan on his own.

But the FBI sees it differently. New evidence points to the suspicion that Ryan is BoneMan. Now the hunter is the hunted, and in the end, only one father will stand.

I really had high hopes to reading "Boneman's Daughter," since I love psychological thrillers!! The excitement fizzled by the end of the book. The first half of the story moved really slow for me. It may have been the 'military' driven aspect of Ryan's kidnapping, but it didn't really keep my interest, but I forged on. When the police began to believe Ryan was the suspect of his daughters kidnapping, it got more interesting and you begin to wonder if he really is the Boneman. The ending was flat and anti-climatic with nothing more then good guy wins over bad buy. I was just glad to be done and able to go on to another book!!!

Thank you to Miriam at Hachette books for this reviewers copy!

Bummer this was on my to get list but this is not the first bad review I heard from other reviewers. Guess I will pass.

Sorry this didn't work for you.

Humm... lots of differing reviews on this one.. Sorry you didn't like but but I love an honest review. :)

(Diane) Bibliophile By the Sea said...

Oh..sorry you did not enjoy this one, I enjoyed his last book: Kiss and was hoping to read this one sometime too.