Update: Only a few days left to vote!! Come on! I know there are more people out there!! VOTE today!!!!
I am trying out some of the gadgets on Blogger and thought a poll question would be fun!!! Would you please take just a moment to answer my poll!!! Just look on the left column of my blog and you will see the poll question!!
If there is genre I missed that you read...let me know..and I can add it!! The poll will be going until next Wednesday!
Thanks for taking the time to take the poll!!! I will publish the results after the poll ends!!
Addendum: Oopss..I forgot a BIG genre.. SciFi/Fantasy!!! Sorry you guys...see that is what happens when you do something for the first time...LOL...Ok..If you want to vote for Scifi/Fantasy...add it as a vote in comments..and I will add it to the poll when I tally it all up on my post!!! SORRY!!!
Posted by Allison at 11/22/2010 12:00:00 AM 12 comments:

Winner of the giveaway is.....

And the Winner of the Giveaway is...
Team JC
Congratulations!!!
I will be emailing you to get your information to have the book sent out to you!!!
Thank you to all that entered!!! Come back soon...I am going to have another giveaway soon!!
Posted by Allison at 11/18/2010 08:13:00 PM 3 comments:

Have you seen Amazon's list of the Best Books of 2010 ? If you haven't, go to the list and take a look at it. I am just curious to see how many of you have read any of the top 10 books on each of the lists. Leave me a comment with which one's you have read!
On the Editors List..of the top ten..I sorry to say I hadn't read ANY of them. I do have "The Girl Who Kicked the Hornets Nest" on my list to read.
On the Customer List ..of the top ten.. I've only read "Mockingjay".
On the Editors Top 10 Mystery/Thriller list...I've read "The Passage" (I need to get that review up!!).
First thing this tells me?? I am NOT reading enough...hahahah!!! But on the other hand it amazes me to see the variety of books on the lists. There sure is something for everyone!!
Hope everyone is have a great fall!!
Posted by Allison at 11/17/2010 11:35:00 AM 2 comments:

Today is the last chance to enter my book giveaway for a copy of "Perfection" !!!! Head to my review and giveaway posting for the book HERE and read the review and then read the giveaway rules at the end and enter in the comments on that post!!!
You have until 10:00pm CT tonight to enter!!!
Good Luck!!
Posted by Allison at 11/17/2010 11:14:00 AM No comments: 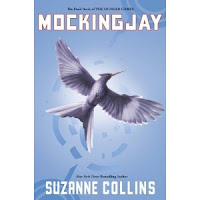 Synopsis:
Against all odds, Katniss Everdeen has survived the Hunger Games twice. But now that she's made it out of the bloody arena alive, she's still not safe. The Capitol is angry. The Capitol wants revenge. Who do they think should pay for the unrest? Katniss. And what's worse, President Snow has made it clear that no one else is safe either. Not Katniss's family, not her friends, not the people of District 12. Powerful and haunting, this thrilling final installment of Suzanne Collins's groundbreaking The Hunger Games trilogy promises to be one of the most talked about books of the year.
Review:
The eagerly anticipated #3 book in the Hunger Games series, Mockingjay, was good...just not as good as the first two books. Don't worry, I won't be giving away any spoilers for this much read and loved series. I will say that the story is much more war and political then the first two books, which focused more on the 'games.'
The author kept the 3 main characters away from each other a lot in this book it seemed to me, which I understood, but it made the story go in to lulls sometimes. I loved the contrast in character Katniss expressed in herself as she interacts with Peeta and Gale. She is so much harder in character with Gale, but much more softer with Peeta. I will tell you that the 'who does she choose' gets answered by the end of the book!!
I have mixed feelings ...as much as I love the series, the ending wasn't quite what I was hoping (wanting?)!!! I don't want you to think I didn't like the book because I did...I guess I was wanting something more.
I look forward to seeing how the movie version of "Hunger Games" is made. The subject matter of the games is going to be hard to convey on screen with all the 'killings.' We shall see!!
Rating: 4 out of 5 stars
Part of:

I was just over at Bibliophile By the Sea and saw her post for a new meme that I can relate to since I am definitely over 40 too!!! It is hosted by Java at Never Growing Old and called...Follow Friday 40 and Over! Its a great way to meet new bloggers!! So head over there HERE now to join this weeks linky and see over 100 bloggers already listed!!!
Posted by Allison at 11/12/2010 09:02:00 PM 3 comments:

Julie Metz had seemingly the perfect life—an adoring husband, a happy, spirited daughter, a lovely old house in a quaint suburban town—but it was all a lie.

Julie Metz's life changed forever on one ordinary January afternoon when her husband, Henry, collapsed on the kitchen floor and died in her arms. Suddenly, this mother of a six-year-old became the young widow in her bucolic small town. But that was only the beginning. Seven months after Henry's death, just when Julie thought she was emerging from the worst of it, came the rest of it: She discovered that what had appeared to be the reality of her marriage was but a half-truth. Henry had hidden another life from her.

Perfection is the story of Metz's journey through chaos and transformation as she creates a different life for herself and for her young daughter. It is the story of rebuilding both a life and an identity after betrayal and widowhood, of rebirth and happiness—if not perfection.

Review:
"Perfection" is an interesting look into one woman's emotional journey and how she deals with the highs and lows she goes through to find herself once again. The beginning of the book was emotional for me when the author talks about how her husband dies and how she deals with it. This first third of the book move along well and was well written, but the rest of the book seemed very rushed. It seemed as though Ms. Metz wanted to make sure to get ALL the details of the affairs written in to the book, before she got to how she coped with it all. It just lost my interest enough to skim over most of the rest of the book. I'm sure it was an emotional experience finding out about all those women, but for me...it was too much extra information. The last third of the book had me cheering her for going forward in life, but some of her actions I question (in my opinion). Everyone leads their own life, whether we the reader agree, we can only hope that she continues to love herself and her family.
I am glad Ms. Metz found the courage and love within herself to write the book and find solace in her life to go on!! Those of us who are widows/widowers can attest to the fact that life throws you a curve ball when you lose a spouse (or anyone close to you).
Since everyone agrees and disagrees about liking a book, I would still suggest you give the book a chance and read it. Some of the reviews I have seen love it..other not. Give it a try and see what you think!!!
Thank you to Lisa Steinke, publicist at BookSparks PR for the Advance Reader book I received to review.
Facebook: http://www.facebook.com/pages/Julie-Metz/132749525472
Website: http://www.perfectionbook.com/
Rating: 3 out 5 stars
****
Book Giveaway!!!
Giving away a copy of the book to a lucky winner!!
Going to make this easy!!
1. One entry allowed - Leave a comment on this post - Tell me what your favorite candy bar is!!!
2. Giveaway is for US/Canada shipping addresses only....sorry!
3. Contest open until Wednesday Nov 17 at 1000p CT...
GOOD LUCK!!!!