To find which books you share with Legacy Libraries: Go to Librarything.com and click on "Statistics" from either your profile or your home page; then click on "Legacy Libraries" in the second row of clickable choices.

My answer:
I had never looked at this option on Librarything...glad to learn something new!! My top match was with Ernest Hemingway where I matched 8 books (some were Jane Eyre, Gone With the Wind, and The Outlines of History by HG Wells).I matched 3 with Carl Sandburg (Wuthering Heights, Black Beauty and The Dream by HG Wells)...and my favorite...Rose Wilder Lane..2 books (Little House in the Prairie and The Happy Golden Years). I had a few more that matched 1-2....none match Tupac though!!

Happy Halloween!! Here's a treat for you!! 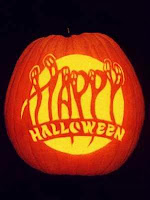 I just got this from Juno books and thought I would pass along. Looks like some good, old time ghost stories!! Enjoy!!

As a special Halloween treat, Juno Books has a FREE ebook (PDF format) for you! Five frightening classic tales--all written by women--that should send a shiver or two down your spine. FIVE CLASSIC GHOST STORIES: A HALLOWEEN TREAT FROM JUNO BOOKS includes "Let Loose" by Mary Cholmondeley (1890), "The Striding-Place" by Gertrude Atherton (1896), "The Lost Ghost" by Mary E. Wilkins Freeman (1903), "Kerfol" by Edith Wharton (1916) and "Spunk" by Zora Neale Hurston (1925). Enjoy!

Tracy over at Bookroom Reviews is hosting a Book Giveaway Carnival from Monday, November 3rd through Friday, November 8th. Over 70 bloggers will be participating with giveaways of gift cards, books and other book related items. I am still trying to decide what book to give away!!

So, mark your calendars to come back here on Nov 3rd!!

Book Review: The Immortals: The Crossing

Synopsis from The Immortal Series website for "The Immortals: The Crossing":

Celtic demigod Manannán mac Lir (Mac) is hot on the trail of Artemis Black, a stunningly dangerous witch who is inexplicably able to intertwine life magic with death magic. Her rare spells nearly killed a faerie infant. For the safety of his people, he should destroy her, but once he runs her to ground, he finds he just can’t do it. Artemis is vulnerable and sly all at once. Every time Mac thinks he’s got her caught, she slips from his grasp. Soon he’s obsessed with her.

Artemis is desperate. So desperate, she’s been skimming life essence from faeries, intending to barter the stolen magic for a demon’s assistance. When her spell gets out of control, she calls it back—but not quickly enough to escape the notice of one very angry, very sexy Celtic demigod.

Passion runs high between Artemis and Mac—but so does suspicion. Who would refuse the help of a demigod? Mac is sure Artemis is hiding something he’s not going to like, and he’s going to stick tight by her side until he uncovers the truth.

Even if she leads him straight into Hell.


I received this book as part of the "50 days, 50 books tour" that I was a part of last month for Joy Nash. I apologize in my delay in getting this review out.

Again, I absolutely love this book! The series is so fluent in the writing it makes you think the same author is writing these books. Joy Nash authors this book about Mac, another of the demigod brothers, that is hot after a witch (in more ways then one!) We are brought in to the world of witches, fairies and demons in this book. Artemis is doing taking life magic away from the fairies, which she has a good reason too, but is not willing to risk telling anyone. This gets her in to trouble and Mac must find her. Mac and Artemis connect, but they push other away. Each has their job to do and they won't let the other stop them. The conflict between dark and life magic has to find a balance for them both to survive the demon world..and each other.

Again, you don't have to have read the other books to enjoy this story. Just be aware it does get a bit hot and steamy in places, but the story itself is worth reading!

Make sure to read my review of The Immortal: The Redeeming" HERE

As Samantha Taylor investigates the abduction of young demon women in gritty Los Angeles, she encounters Tain, the Immortal she hasn't seen since his enslavement to a powerful demon the year before.

Now Tain needs Samantha's help, and Samantha wonders if she can hide the fact that she's in love with him while they work together. Tain spent years being tortured by a demon--the last thing he'll want is a half-demon woman longing for him . . . or so she thinks.

Haunted by his past, Tain seeks peace by healing others, but he's not sure if the madness that trapped him has completely gone away. And he's never been able to get the dark-eyed Samantha Taylor out of his mind.

This is book 5 of the Immortal series, which I received from the author Jennifer Ashley . I had found out that I was getting an ARC of book 6 "Immortals:The Crossing" from Joy Nash, but wanted to read book 5 (first one of this set) first. Jennifer was kind enough to send me a copy. She warned me that the book was hot and steamy...and she was right!!

I loved this book! I've always loved anything paranormal, but never read any of these type of books. I'm hooked! The characters of Samantha and Tain are amazing. Both love each other but feel that can't let the other know because of who they each are....so different. This difference though is what makes the chemistry so hot between the two of them. The book takes you in to the world of demons, vampires, werewolves, demigods and humans who all try to coexist together. The storyline describing how each survives living with those they hate is mind boggling. How do we know these people don't really exist in our world? Maybe you live next door to a demon and don't know it?!

"The Redeeming" mixes paranormal and romance together to make a hot, interesting and intrigueing storyline that I can't wait to read more of!! I will now have to find the first four of the series to get caught up on some of the storylines, but I found you will enjoy this book without knowing about the past books.

Make sure and check out my review of book 6 "Immortals: The Crossing" HERE

This series is actually being written by 3 different authors that take turns writing a book and they also write some together. Make sure and check out their websites:

Book Review: The Anteater of Death: A Zoo Mystery 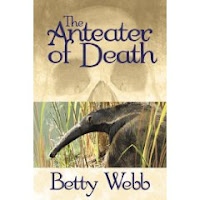 What do you get when you mix an anteater, upper crust families and murder? A mystery novel full of adventure and fun looking for a murderer! The books main character, Theodora ‘Teddy’ Bentley, works at the local zoo as a zookeeper in charge of a number of animals, including a pregnant anteater. A murder occurs in the anteater’s enclosure and everyone wants to blame the animal, but Teddy knows better and puts her self in charge of finding out exactly what happened. The local sheriff Joe, her ex fiancé, even asks for her help in finding some answers to the killing. Teddy runs in to some roadblocks along the way. Her mother doesn’t like her working at the zoo, which she finds distracts from Teddy finding a spouse. The upper-crust families want her to stop asking questions around the neighborhood. Family secrets arise left and right as she gets closer to finding the truth. As Teddy and Joe rekindle their feelings, the stakes get even higher when there is another murder. With the threat of the anteater being taken away or worse, Teddy must find the real murderer. Even at the risk of her family and her own life!

“The Anteater of Death” is the first book in the new Gunn Zoo Mystery series by Betty Webb. I am already looking forward to the next one. I was enthralled in Teddy’s life. The story moves along fast and easy to read. The moments from Lucy the anteater’s ‘thoughts’ brought an interesting angle of what animals think when humans are around them. The mix of Teddy wanting to lead her own life away from her rich family and her families ‘family issue’ problems, put an interesting underlying storyline to the mystery. Amateur sleuth and zoo keeper combine to make this book an intriguing book that I would recommend to others.

I love the zoo. My first stop is always the gorilla and chimpanzee exhibit. I’ve often watched them and wondered what they were thinking, especially about how they feel about people watching and starring at them all day. I would be curious to know why the author chose an anteater out of all the animal choices.

This story of a murder mystery tosses in a bit of zoo life to become a book that will have both kids and adults grabbing “The Anteater of Death” off the shelves to read. Take the time to go to your local zoo, but be careful. You don’t want to end up in the next mystery at the zoo!!

Book received and reviewed from RebeccaReads.com

The Boston Bibliophile connects us with Banned Books Week today, with this task: For this week’s Tuesday Thingers, I’ve copied the list of the most-challenged books of the 1990s straight from the ALA website. I’ve highlighted the ones I’ve read. Highlight what you’ve read, and italicize what you have in your LT library.