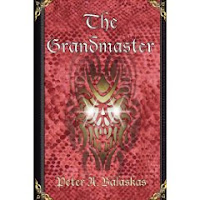 Quote from the book…“The eyes of the demon have returned.”

Peter Balaskas’ opening sentence from the book “The Grandmaster,” will give you chills, but curiosity will grab you to make you wonder who or what this demon might be. This novella takes paranormal abilities and historical details of the Holocaust and creates a story of hope and tragedy.

Dr. Johann Wagner has run the Wagner Institute for Mental Treatment and Investigations since 1966. He suddenly feels that a horror from his past has come back to destroy what he has built. In his journal, he talks about events in his past from the Holocaust, which might explain why he is having these terrible feelings. He writes about how he used his extraordinary powers to survive the dreadful life he led in concentration camps. In the second camp he is at, he meets Heinz, the head orderly, whose tongue had been cut off due to his anti-Hitler political speeches. The two becomes friends and Johann shares his secrets with Heinz. Every morning at head count, he sees a woman that he connects with, with only a smile and nod. Dr. Wagner knows that his choices will affect the life of not only him, but all those around him. We learn how he realized he had powers, the loss of his parents, developing his abilities and finally having to decide whether to use them to survive. A chess game with Commandant Reinhardt (who happens to have paranormal abilities too) will be the deciding factor of what happens to his life at the camp. It is a balancing game of surviving or dying that he lives with every day.

I absolutely loved this book and recommend it to everyone. The plot, characters and theme blend together to make an amazing story, that you will not want to put down. In only 90 pages, you feel as though you’ve lived the life of Dr. Wagner. The creativity Balaskas uses with a man’s paranormal abilities and the stories of the Holocaust makes for an enthralling and clever tale that you will be talking about days after reading the book!